What companies are actually doing to empower Women in Tech : The theory vs the reality

So much awareness these days, (to my delight), is about rectifying the gender imbalance in the work place across pretty much all industry sectors and tech is no exception to jump onto this band wagon. Yay (so I thought).

What companies are claiming they will do:

So these are the claims corporate voices are making, but on the ground, in the trenches where it counts, what are companies actually doing?

As an advocate for promoting women in tech and young girls pursuing STEM careers, and having been a female active in tech for over 22 years (yes I’m one of the original geek girls who was in tech long before it became cool), this is what I’ve experienced:

So 3 out of 6 companies (50%) that were recruiting females highlight “Equal Pay” as a benefit? Could this be any more patronizing?

Let me be clear: I embrace both my role as career woman and mother with equal vigour and take them equally seriously. Why then in the workplace should I be placed at a distinct disadvantage simply because I am a mother? Is the message of our day to women that “we can have it all” and are expected to actually; when in fact the truth is we experience discrimination when we embrace both career ambition and motherhood?

South African companies (and global ones too), if you are trying hard to empower women in the workspace, may I as a working mom, recommend the following approach:

Lastly, as mentioned I am very pleased to see an increase in initiatives that empower women and that there is now an awareness drive to promote women in male dominated fields, but if you are going to do this, make an effort to do it properly. These are the current stats from Statistica.com on the average hours done per day (paid and unpaid), by gender and region. I am optimistic and hopeful that these numbers will change for the better especially for the next generation of women (as a mom of a strong willed 10yo daughter who believes she can be anything , I have to be optimistic) , however based on what I’ve seen, following the current script is a sure fire way NOT have any impact on the gender imbalance. 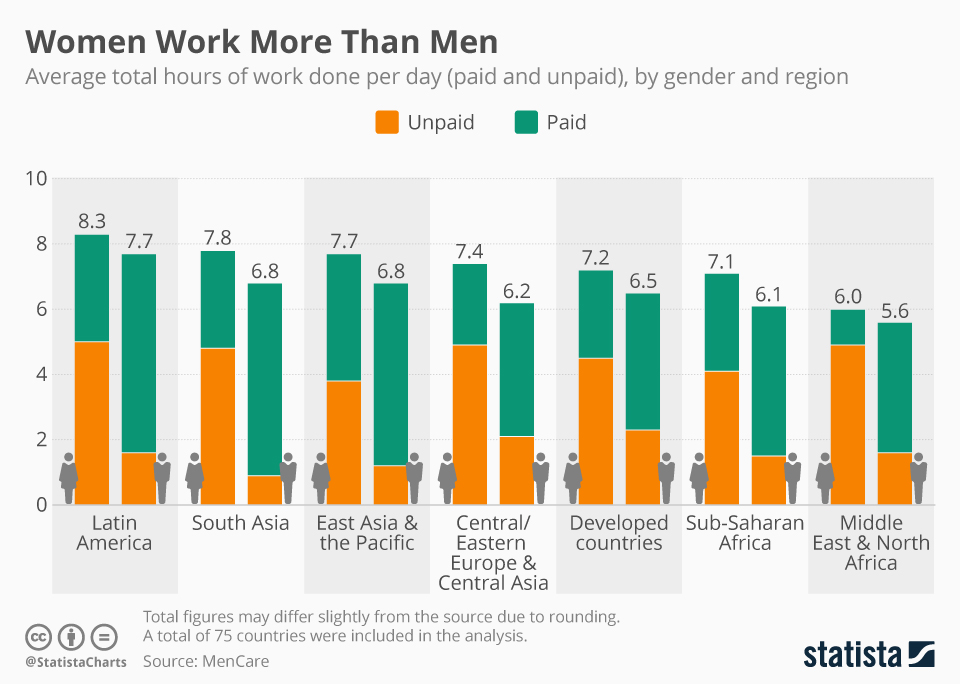